Learn all about self-guided smart bullets. Currently, US Army snipers are expected to hit a target 600 meters away, nine times out of ten. But after a certain point, about a kilometer away, accuracy falls off sharply, even in perfect conditions. Besides, current technology simply does not allow snipers to easily estimate the impact of humidity and cross-winds on the bullet trajectory, meaning that even the best will often have to fire several bullets before they even get close ruining the surprise factor, and placing themselves in danger of return fire. EXACTO promises a range of up to 2,000 meters, as well as a virtual indifference to conditions.

The EXACTO 50-caliber round is claimed to be the first ever guided small-caliber bullet. The maneuverable projectile uses a real-time optical guidance system to change its path mid-flight and home in on a target, potentially overcoming adverse weather and hostile conditions to improve sniper accuracy.

DARPA isn’t giving too much away in terms of technical detail. However, if the illustration above is any indication, the steering mechanism used by DARPA appears different to the method used by a team at the Sandia National Laboratories back in 2012.

For military snipers, acquiring moving targets in unfavorable conditions, such as high winds and dusty terrain commonly found in Afghanistan, is extremely challenging with current technology. It is critical that snipers be able to engage targets faster, and with better accuracy, since any shot that doesn’t hit a target also risks the safety of troops by indicating their presence and potentially exposing their location. 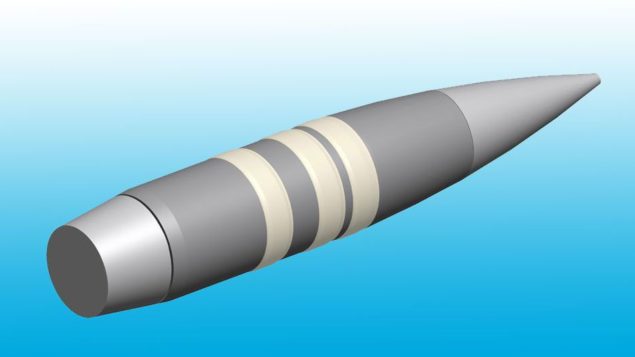 A smart bullet is a bullet that is able to do something other than simply follow its given trajectory, such as turning, changing speed or sending data. One kind of smart bullet is a projectile that is capable of changing its course during flight. One use of this would be to enable soldiers to stay behind protective cover and shoot around corners. One implementation uses a spoiler and micro gyro to control the bullet. The US Army has revealed testing of a revolutionary self-guided bullet is at an advanced stage. The latest trials of the Extreme Accuracy Tasked Ordnance, known as Exacto, program has shown even first time users can hit a moving target. The bullets have a real-time guidance system to track targets, and can change their course if needed.

Infrared homing is a passive weapon guidance system which uses the infrared (IR) light emission from a target to track and follow it. Missiles which use infrared seeking are often referred to as “heat-seekers”, since infrared is radiated strongly by hot bodies. Many objects such as people, vehicle engines and aircraft generate and emit heat, and as such, are especially visible in the infrared wavelengths of light compared to objects in the background.

US military developing advanced laser guided technology for sniper bullets. A great step for us military 50 caliber ammunition technology US military research agency DARPA says it is homing in on its long-term ambition of producing self-guided bullets, after staging a test in which a sniper was able to shoot at a target at a radically wrong angle, and yet still hit it perfectly.

Exacto Bullet by DARPA for US Army

Military often has to face unfavorable conditions such as harsh weather, wind, and moving targets that reduce the accuracy of soldiers, and it would normally be the preserve of specially trained snipers to hit difficult targets. The smart bullets don’t just increase squaddies accuracy either; it can also increase their range. “EXACTO has demonstrated what was once thought impossible: the continuous guidance of a small-caliber bullet to target,” explained Jerome Dunn, DARPA program manager. “This live-fire demonstration from a standard rifle showed that EXACTO is able to hit moving and evading targets with extreme accuracy at sniper ranges unachievable with traditional rounds.” The fact that they have fit such advanced and impressive tech into a relatively small .50-caliber round is a “major breakthrough” and opens the door for the ability to expand the system into other larger caliber shells at some point in the future.

The EXACTO program developed new approaches and advanced capabilities to improve the range and accuracy of sniper systems beyond the current state of the art. The program sought to improve sniper effectiveness and enhance troop safety by allowing greater shooter standoff range and reduction in target engagement timelines.

Future sniper rifles will be so advanced some of them are;